Surtrac (Scalable URban TRAffic Control) is a real-time adaptive traffic signal control system developed in the Intelligent Coordination and Logistics Laboratory at Carnegie Mellon University (CMU) as part of CMU’s Traffic21 Research Initiative. Surtrac combines new concepts from the fields of artificial intelligence and traffic theory, and is designed specifically for optimizing traffic flows in urban road networks, where there are multiple, competing dominant flows that shift dynamically through the day. In contrast to most commercial adaptive traffic control systems, Surtrac takes a totally decentralized approach to traffic control. Each intersection allocates its green time independently based on actual incoming vehicle flows, as seen through video or radar detection, and projected outflows are then communicated to neighboring intersections to increase their visibility of future incoming traffic. Reliance on decentralized intersection control ensures maximum real-time responsiveness to actual traffic conditions, while communication of projected outflows to neighbors enables coordinated activity and creation of green corridors. The system is inherently scalable to road networks of arbitrary size, since there is no centralized computational bottleneck.

An initial pilot implementation and field test of Surtrac was carried out in June 2012, on a nine-intersection road network in the heart of the East Liberty region of the City of Pittsburgh where Penn Avenue, Centre Avenue and Highland Avenue intersect. A series of “before” and “after” drive through runs were performed at 4 different periods of the day, and various performance metrics (travel time, speed, number of stops, wait time, fuel consumption, emissions) were computed for each test condition. Across all metrics studied, Surtrac was shown to produce significant performance improvement, including an overall 25% reduction in travel times, a 40% reduction in wait times, and a projected reduction in emissions of over 20%. In November 2013, the pilot deployment was expanded to include nine additional intersections moving eastward along Penn Avenue to the major cross-corridor at Fifth Avenue. Near identical additional improvement was observed when an analogous evaluation was performed. In early 2015, the deployment was further expanded to include 6 additional intersections moving east on Penn Avenue to Braddock Avenue at the City’s border. In October 2015, the size of the Pittsburgh Surtrac deployment was doubled, this time adding 23 intersections moving west from the pilot deployment site along the Centre Avenue and Baum Boulevard corridors to Craig Street in Oakland. Plans are in place to add 2 additional intersections by the end of the year, which will bring the size of the deployment to 49 intersections.

Current research with Surtrac is focused on extending its multi-modal capabilities, to give more active attention to pedestrian, bicycle and bus traffic, and on integration of Surtrac adaptive signal control with connected vehicle technologies. The 24 intersections along the Baum Boulevard and Centre Avenue corridors have been equipped with DSRC roadside units, and provide us with a live test-bed for investigating such applications as integrated transit prioritization and real-time vehicle routing. We are also pursuing opportunities for further deployment of Surtrac, both in Pittsburgh and elsewhere. 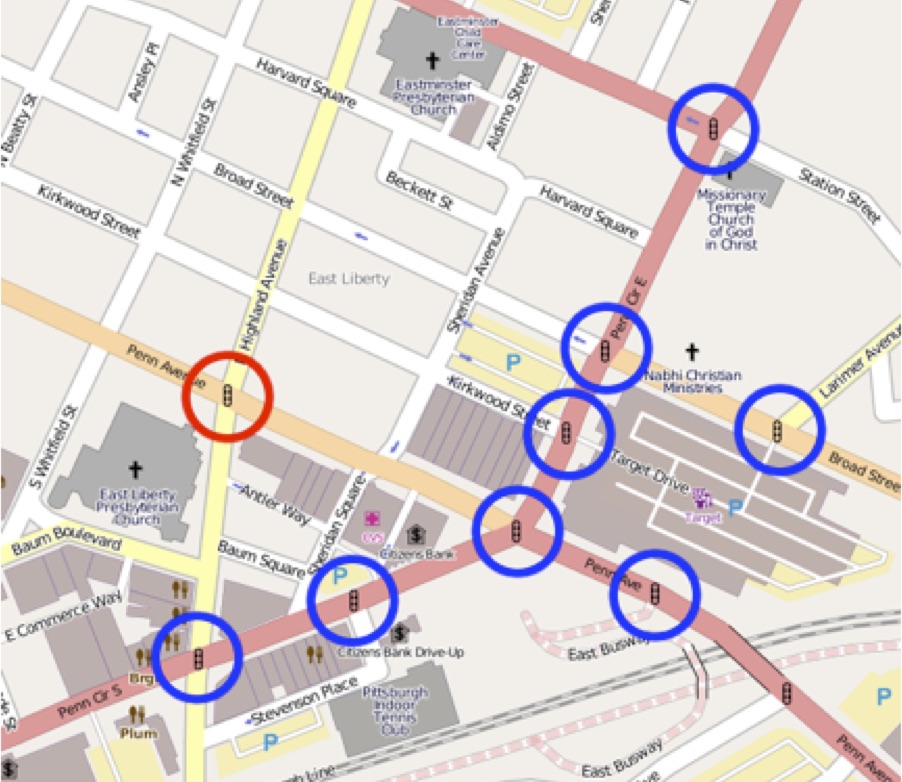 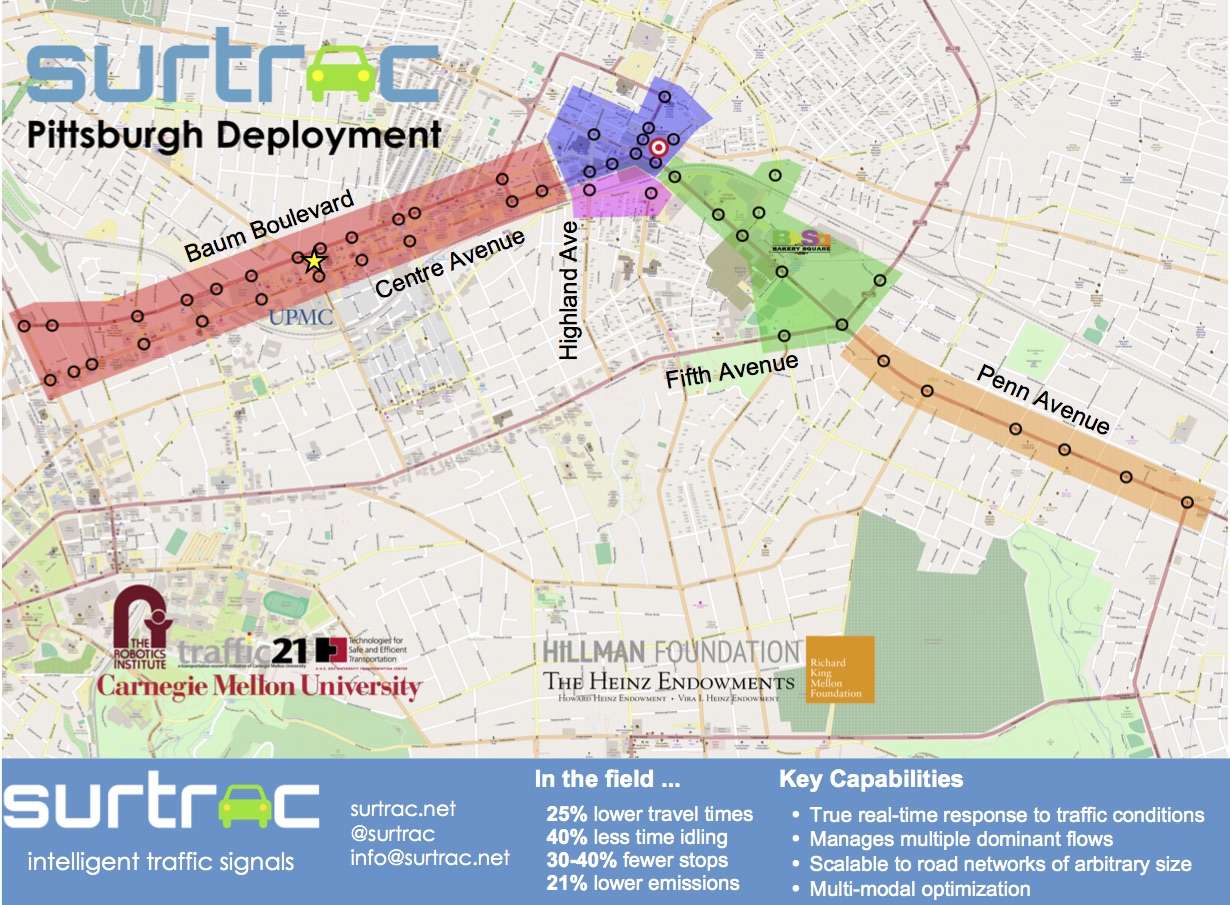 Acknowledgements: This project has been funded by The Hillman Foundation, The Heinz Endowments, The Richard King Mellon Foundation, UPMC, the CMU T-SET University Transportation Center, and CMU The Robotics Institute.

We have constructed a framework for distributed simulation of Surtrac traffic signal control, and integrated it with the VISSIM microscopic traffic simulation tool to enable analysis of potential Surtrac performance benefits in different traffic networks. We have used this framework to assess the potential of Surtrac adaptive control in a number of different urban traffic environments: